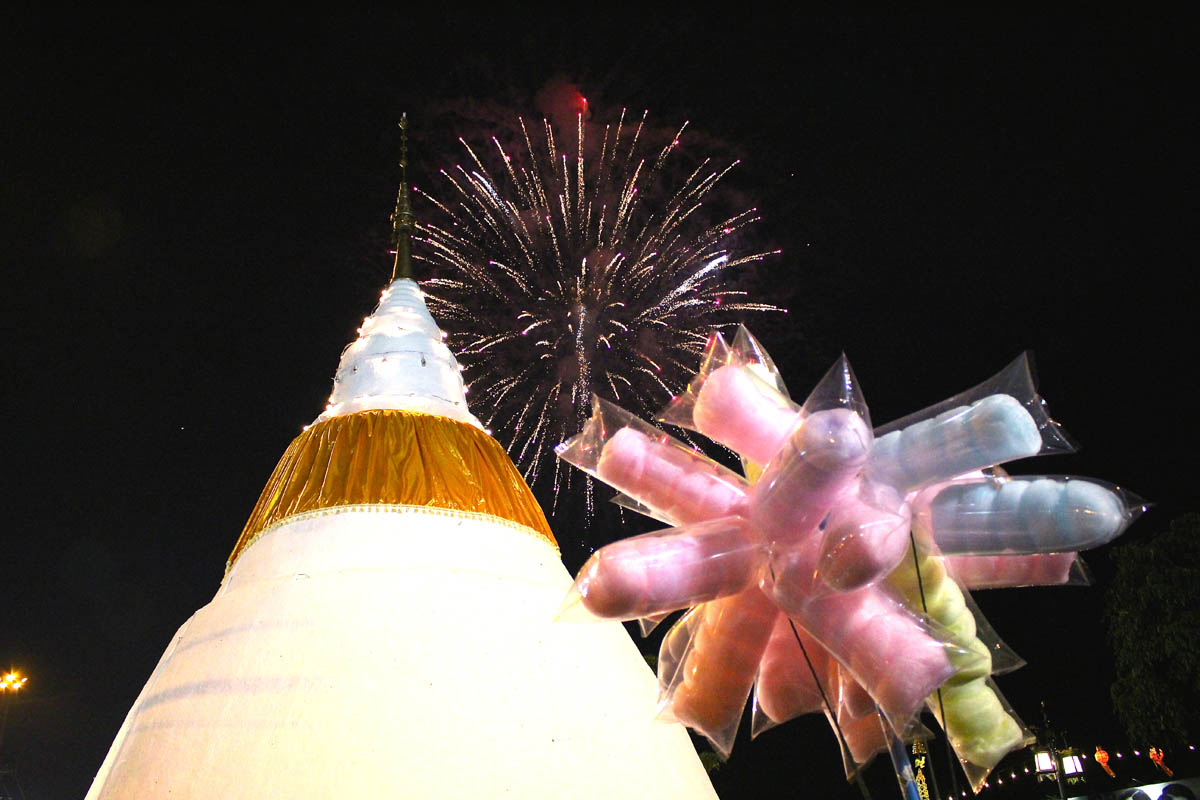 Loy Krathong is a popular holiday in Thailand for tourists and has become known internationally thanks to the custom of releasing giant lanterns into the sky. Sometimes referred to as the Lantern Festival, Loy Krathong is a time to let go of misfortunes in the past year and wish for luck in the new one. Celebrating Loy Krathong in Chiang Mai was a special experience. We were lucky to get to participate in one of the largest celebrations of the holiday in Thailand.

Lanterns come in all shapes and sizes. Some are even shaped like Hello Kitty or other animal heads. Hanging lanterns are placed around the city in the days leading up to the festival and wats decorate their entrances with candles and flowers. It was fun to see the decorations come together and add color to the city. Strings of lights were even hung across the main streets.

For the three days of the festival, the city is filled with candles. Every night you can see lanterns dotting the sky, although the night of the full moon is the biggest. 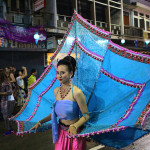 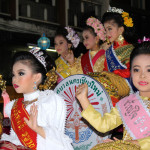 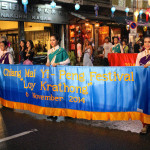 Besides releasing huge paper lanterns, Thais build krathongs out of sections of palm trees, leaves, flowers, bread and other organic materials to float down the river. These krathongs are outfitted with candles, sparklers and incense. Buddhists line the river to offer up their misfortunes and bad luck from the last year to the water spirits, hoping they will carry away all their negativity with the floating krathongs. Before placing it in the water, you are meant to make a wish on it, and the longer your candle keeps burning, the more likely your wish is to come true. Sometimes couples set their krathongs afloat together in hopes that they stay side by side, signifying a long lasting relationship. The krathongs can be quite elaborate, although most were only about 30 baht (1 USD).

You might wonder what happens to these thousands of lanterns after they are released. What goes up must come down, and sometimes it does so on fire. We saw one lantern-turned-fireball fall right in the middle of the Loy Krathong parade and another land in the middle of a crowded bridge. Luckily, both times people pointed out the danger and everyone was able to calmly get out of the way. A few other lanterns that didn’t quite make it ended up fiery balloons in the river or drooped over power lines. We saw the sad, charred remains of lantern scattered on the roadside or stuck in trees all the way out in Chiang Rai on our road trip after the festival. 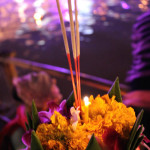 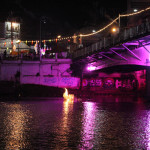 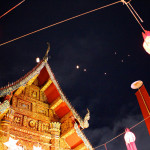 Despite having to keep your eye open for dying lanterns, Loy Krathong is uniquely peaceful for a huge celebration. The occasional firework set off a little too close for comfort made us jump and the streets were crowded, but everyone was relaxed and happy.

The celebration begins each night with a huge parade with elaborate floats and costumes. Music blares from loudspeakers in the back of trucks. The parade starts at Thae Pae Gate and goes down along the river where crowds of people are setting off fireworks and lighting lanterns. Most krathongs are set in the river, but there were plenty of people placing theirs in the moat surrounding the Old City as well.

Unsure exactly what to do with our newly purchased krathongs, we stood in front of a small floating pier made of bamboo, watching others set theirs in the river. We were wondering how to light our candle when someone passed us with a lighter in hand. Before we could even ask, the man turned to us holding our unlit candles and asked if we needed a lighter. “Good luck,” he smiled, as if it were “Merry Christmas.” The good wishes made our night. I love the warm feeling you get when a collective society is holding onto and sharing positive thoughts. It reminded me a lot of the Christmas season with the town lit up and everyone smiling at each other and staring into the sky to take in the beauty of it all.

Watch our video from Loy Krathong!