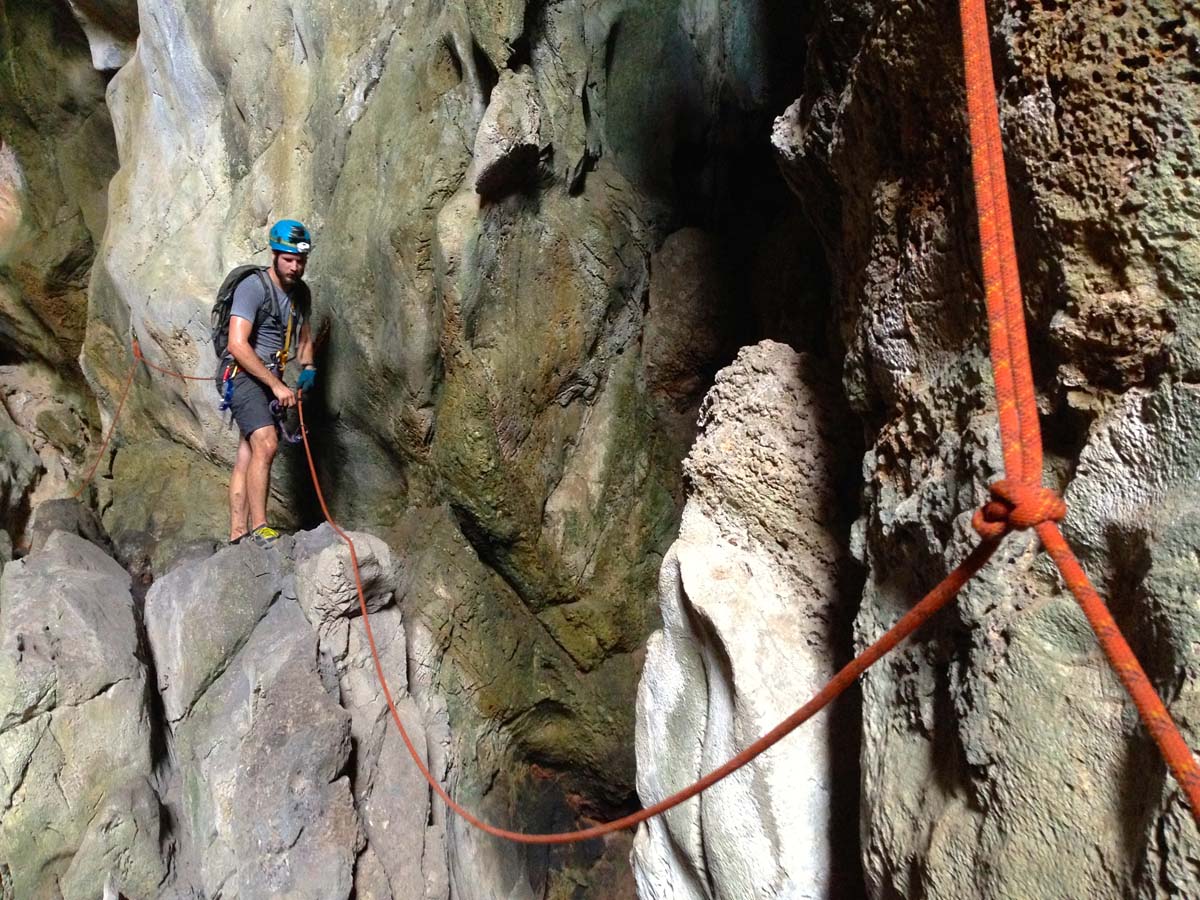 Adventure, Reviews
by Eric and Evanne

Our Introduction to Caving class with Chiang Mai Rock Climbing Adventure (CMRCA) ended up being a lot more rappelling and scaling up ropes and a lot less crawling through holes than we expected. It was an unforgettable experience and the cave was an amazing natural phenomenon to behold.

We met the team at CMRCA’s office in the southeast corner of Old City where they fitted our gear and we filled out some short paperwork. The drive from the office out to Crazy Horse Buttress was about an hour filled with lovely countryside scenery. 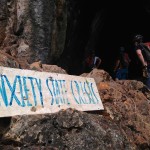 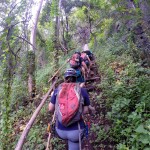 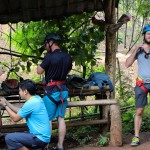 When we arrived, we hiked a short way up to the entrance to the cave and immediately encountered a 15-foot-tall rock face. Challenge accepted. Here, we practiced our sit-stand technique, the art of climbing up a rope like a frog using an ascending tool and a foot loop. At the top, the rock face turned out to be a ledge and on the other side was a drop three times as far. Starting to really appreciate those harnesses.

We made our way along the ledge, following our safety rope and down as the cave continued. Next to us was a giant hole too deep and dark to see the bottom. Our guides were working their way toward it, securing the rope that would keep us attached to the wall. That’s when we realized that into that hole was exactly where we were headed. 40 meters straight down into a mystery abyss.

One by one, we were hooked in, leaned back over the edge and started to lower ourselves down. Just when the going got pretty easy and we realized not being able to see the bottom was actually helping, the wall ended and there was no longer anything for our feet to touch. So the remaining 30 meters or so were spent dangling from nothing but a single rope surrounded by empty air that wouldn’t be much help in a situation that involved falling… but we were perfectly safe and everyone made it down without any trouble. 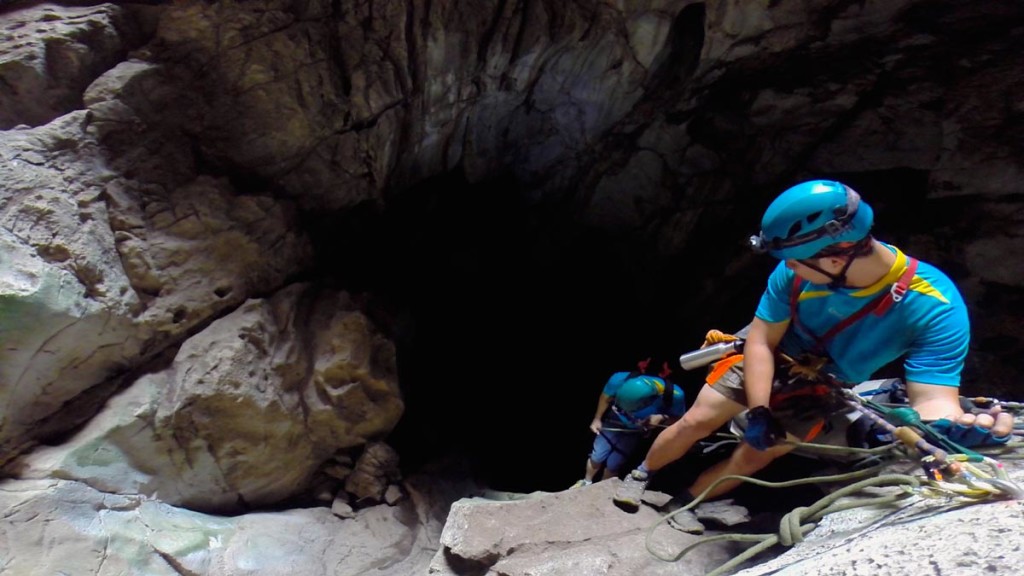 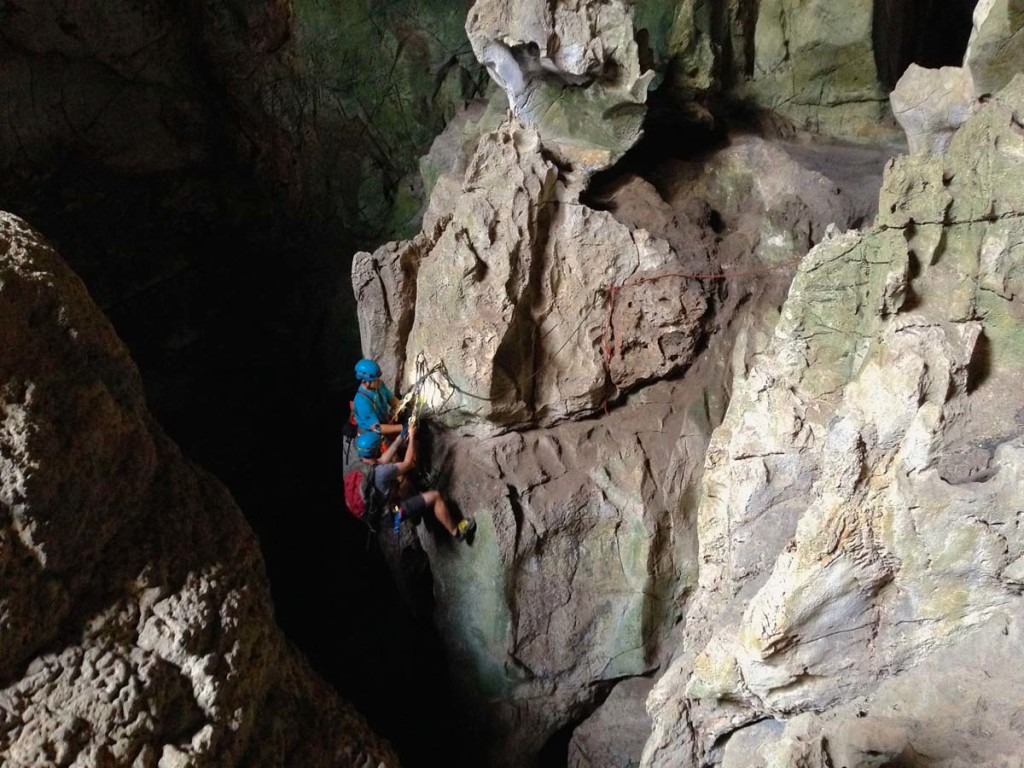 At the bottom of the hole, we looked back up at the last sight of light and sat to enjoy lunch. In front of us, the cave grew into a massive cavern.

Our guides explained the different formations we would see while we explored and warned us not to touch the “live” ones as they are very fragile and even the oil from your hand can prevent them from growing any further. These flowstones are a crazy thing to behold. Some of the oldest ones were several stories tall and looked like giant snow monsters covered in glitter. 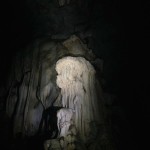 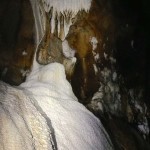 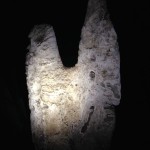 The ground of the cave was moist and muddy enough to leave footprints, but not difficult to walk on. As we continued, we began to see tiny flashes of green on the floor, the walls, the stalactites. Come to find out these were the reflective eyes of spiders the size of your face and they were everywhere.

Moving on we came to a room where the floor was covered in eyeless millipedes about an inch long. We got a good look at the creepy crawlies and then our guides suggested we turn off our headlamps to experience how dark dark actually was in the depths of the earth. We obliged, pretending we aren’t scared to move in the nothingness until finally someone caved and switched theirs back on. Immediately we heard squeaking and looked up to see hundreds of bats filling the ceiling of the (luckily) cavernous room. We were then told that the millipedes were living there because they feed off the bats’ poop. 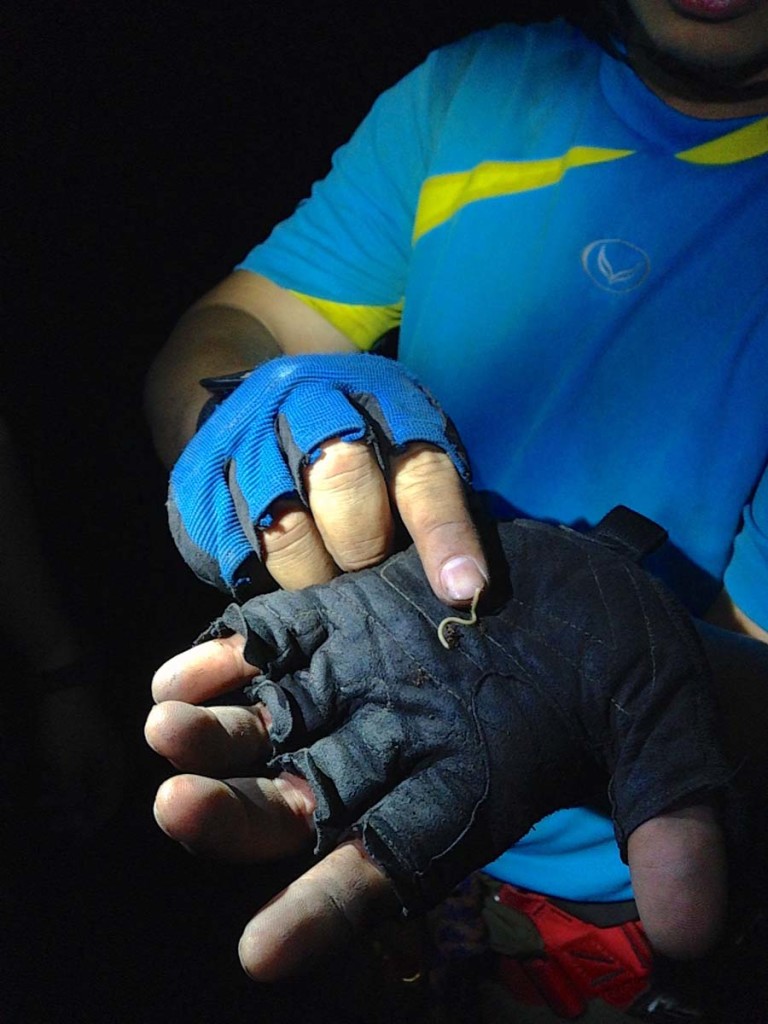 So the animals living under the ground might not be the prettiest, but the cave itself was gorgeous. The rocks merged together and broke apart to form elaborate structures and false tunnels sprouted from the main path. In one of the larger rooms lay a sunken portion of the earth which continues to grow deeper and deeper each year. No one knows why exactly, but our guides speculate a stream, which they can see at other portions of the cave, runs under this section as well.

Being in such a mysterious place was just as much of an adventure as climbing out of it. Down in the largest rooms, we were able to walk around freely and take in all the sights. Only when we turned back did the realization sink in that we would be getting out the same way we came in. Back up that dangling rope. 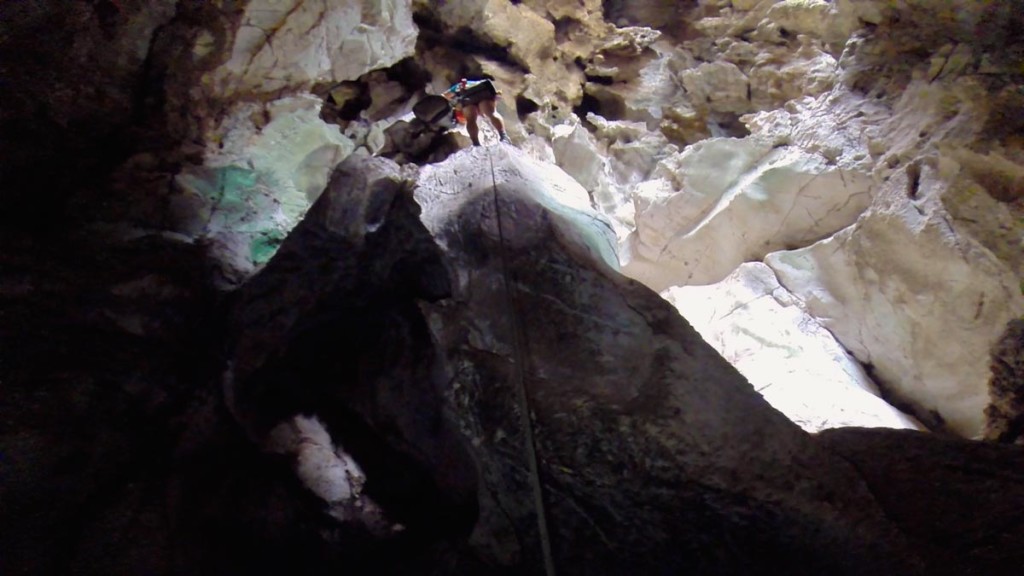 Good thing we had practiced our skills at the beginning. Our first guide flew up the rope in just over two minutes, making us think for a moment that it might be easy. Of course, none of us do this every day so we all took about three times as long to frog-leg our way up out of the hole. It was a fantastic workout and the physical exertion made the height a non issue.

Our caving experience was challenging enough to keep our attention for the entire day. We felt like we were genuinely exploring, led by our guides who always made sure we were safe and answered all our questions. It was humbling to be in an environment with so little answers and so many strange creatures. 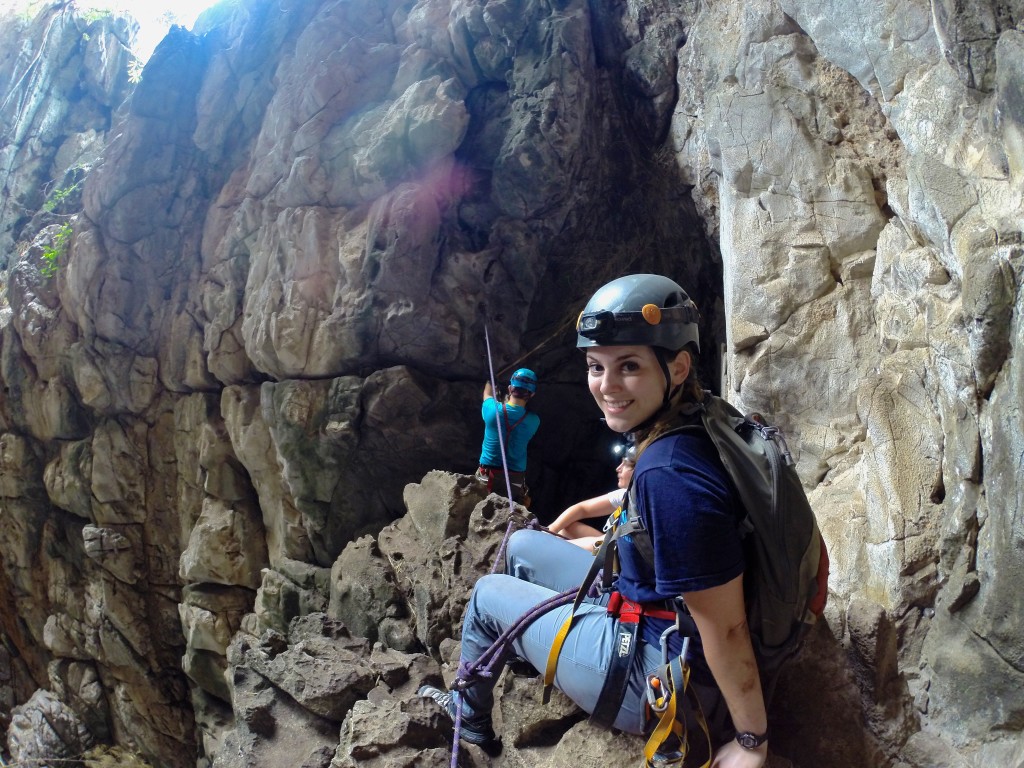 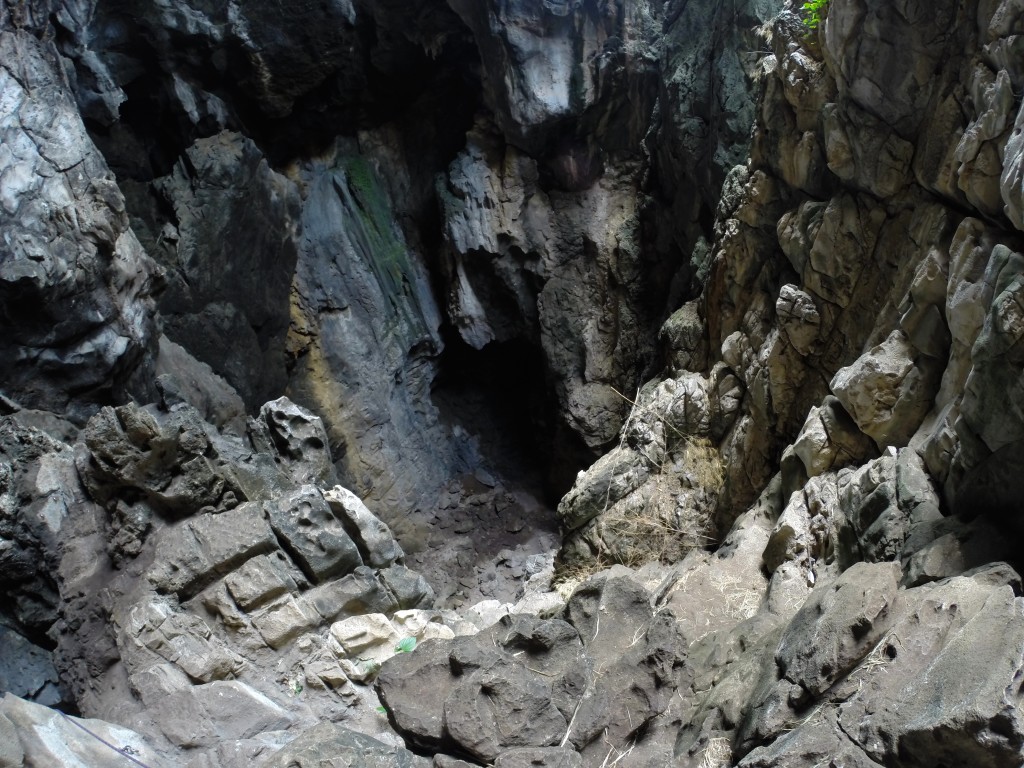 Poplar Travels participated in this activity as a guest of CMRCA. Our opinion is always our own. 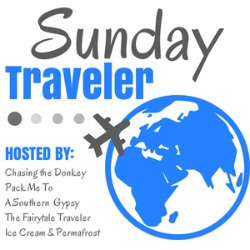 Evanne and Eric left jobs in Washington, D.C., headed for Chiang Mai, and look forward to exploring everywhere in between.

Sorry, the comment form is closed at this time.